Taal Volcano is located in Talisay, in the city of Tagaytay. When writing this, I was thinking about having Taal Volcano as a separate destination, but it’s one and the same as Tagaytay.

Some people go to Taal Volcano and some don’t, but everyone goes to Tagaytay. Tagaytay has a number of cafes and restaurants offering sensational views of Taal Volcano.

In fact, Tagaytay City is right on the border between Batangas province and Cavite province.

Until January 12, 2020, Taal volcano hadn’t erupted since 1977 despite being the second most active volcano in the Philippines.

This current volcanic activity as of 13 January 2020 was measured as alert level 4 (intense unrest), which is one level down from the highest level which is level 5, which signifies a hazardous eruption.

Volcanic thunderstorms produced volcanic lightning above the crater as a result of the ash clouds from the volcano.

The eruption has progressed into what is known as a magmatic eruption which is often characterised by a lava fountain, which in turn causes thunder and lightning in the surrounding atmosphere.

At least 335 volcanic earthquakes were monitored in the 72 hours after the initial eruptions with the strongest being measured at magnitude 4.1. There is also the possibility of a volcanic tsunami in the crater lake of Lake Taal.

As a result, tens of thousands of people have been evacuated from the nearby area with approximately 25 million people living less than 100 kilometres from the volcano itself. Largest Crater Lake In The World

The crater lake on volcano island is the largest lake on an island in the world. The crater of the main lake measuring 2kms in width. Sound confusing? To put it simply, it’s a volcano within a volcano.

When you first look at this unique volcano, at first you are confronted by a large lake. The lake then has a volcano in the middle of it. However, the lake itself is actually also a volcanic crater!

The key tourist attraction is to go over to the volcano island in the middle of the lake. From there you hike to its summit where you can then look at the lake inside the crater of Volcano Island.

Boats are readily available down on the shore of the lake to take you over to Volcano Island. You will also often have boatmen advertising their services as you enter Tagaytay.

You do need to haggle, but you shouldn’t expect to pay for than P1,000 for the return boat ride to and from Volcano Island.

Once you cross the lake and reach Volcano Island, you will be confronted with locals offering to take you to the summit via horseback.

Although you can walk, it is recommended to go via horseback for two main reasons: Firstly the trail up is very, very dusty due to the nature of the soil and the repeated wear and tear from the horses hooves and secondly; the money earned by these indigenous people for taking you on their horses is their only source of income.

The horses are guided up to the summit and don’t really break into a gallop. If you are not experienced riding horses, don’t worry too much. The ride up to the summit of the volcano is about 2kms and takes about 30-40 minutes.

Once up there, you have a great view of the lake inside the crater of the island volcano. You also get 360-degree views of the main crater lake and the surrounding caldera and mountains. It really is a spectacular view.

Being an active volcano, you will be able to see sulphur gas being released from various sections of the volcano on the way up, as well as on the crater itself. This really does bring about awe-inspiring feelings.

There is water and various snacks available at the summit, so there is no real need to bring any food. However, be prepared to get very dusty and a bit wet from the boat ride.

You need to come dressed and prepared to get dusty and wet. It also gets quite hot at the summit, so make sure you have a hat and sunblock or wear long-sleeved clothing.

The boat ride over to the volcano return cost P1,000 (6 pax), hire of a horse to take you to and from the summit P600 per person, per horse. Taal Volcano isn’t the more visible crater at the front, it’s the one at the back which isn’t clearly visible from this photo. 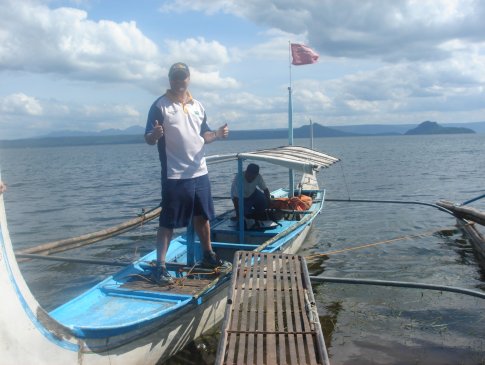 Preparing for the boat ride across the lake which is actually a volcanic crater and the largest crater lake in the world on an island. Me at the top of the crater of Volcano Island which has had 33 historical eruptions with the most recent one being in January 2020.

Please click below to watch my short video about Taal Volcano.

Unbelievable! A volcano within a volcano | Deztreks

Taal Volcano is located about 75kms from Makati and is approximately a 1.5-hour drive via SLEX via the Sta. Rosa exit.

Once you reach Tagaytay-Calamba Rd, turn left and look for Ligaya Dve which will take you down to Sta. Maria where all the boats are.

Or, you can take the offer of one of the many vendors you see offering their services.

From Makati, take a bus bound for Tagaytay and get off at the jeepney terminal before the rotunda in Tagaytay. Cost is approx. P300. From there, take a jeepney bound for People’s Park cost about P50.

From there look for Ligaya Dve and take a tricycle down to Sta. Maria where all the boats are. Cost is about P20.

The water in the main lake can get quite choppy as the day goes on, so it is advisable to go as early in the day as possible (be on the boat by 8am).

If you do leave early, then after your trip to the lake, you can head to Tagaytay for lunch at one of the many restaurants on the crater rim, and enjoy your lunch whilst overlooking the volcano island.

You can also avail of a tour package from a duly registered travel agency which will basically offer a door to door package.