Caramoan is a first-class municipality in the province of Camarines Sur, in the Bicol Region, and is located at the tip of the Caramoan Peninsula. This isn’t the easiest place to get to, but it is well worth it. There are pristine white sand beaches, lagoons, caves, limestone cliffs, and karsts. There is abundant marine life, underground rivers, sandbars and deserted islands.

The landscape is mostly very rugged and as such, has been used for the filming of several episodes of the reality TV show, Survivor, including the series from US, Israel, and several European countries. To survive in some of this isolated, rugged, yet beautiful terrain, without creature comforts, would be a real challenge for sure.

We based ourselves out of the Gota Beach and stayed at Gota Village Resort, which also happens to be where the cast and crew of the Survivor TV series stay, so the standards there are pretty good. The cost was around P2,000/night for a family room. When we stayed there, it was my youngest daughter’s birthday. The lovely staff put on a bonfire right on the beach just for us. My kids absolutely loved it!

We did two separate days of island hopping. The first day we did Tayak Beach and Tayak Lagoon, then Matukad Island and finally Hunongan Cove, all close together and not too far from Gota Village.

The second day, we did the long trip out to Cotivas Island, which took two hours there and back. That left us time to go and check out the Bulanbogang underground river which was only about a 15mins drive from the resort.

I have to say, by the end of our trip, I found Caramoan comparable in natural beauty to Palawan and Sipalay and there were much fewer people! This is a definite must see if you can stick out the journey getting there.

Another thing to do down that way is, when in Naga, either on the way to or from Caramoan, check out the Cam Sur Watersport Complex. This is a very popular tourist attraction and is one of the Philippines best Watersports Parks. For those that dig wakeboarding, wakeskating, and waterskiing, this is a must-see. 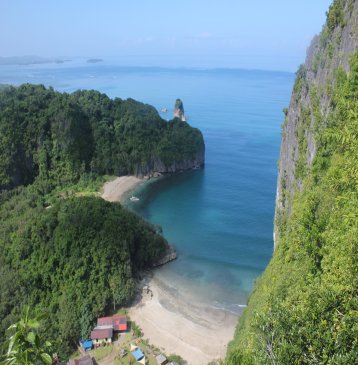 This is Gota Beach where Gota Village Resort is located. I had an agonizing climb up the steep limestone mountain to snap this shot. However, it was well worth it to capture the amazing views. 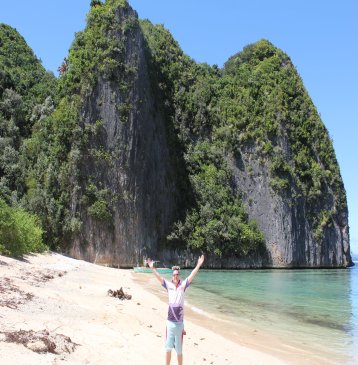 Tayak Beach, about a 45 min boat ride from Gota Beach, is the front for an amazing Blue Lagoon. We had this beach all to ourselves for a couple of hours. Tayak lagoon, situated just behind Tayak Beach. This is reminiscent of Palawan’s famous Kagayan lagoon and lake – except we were the only people there! 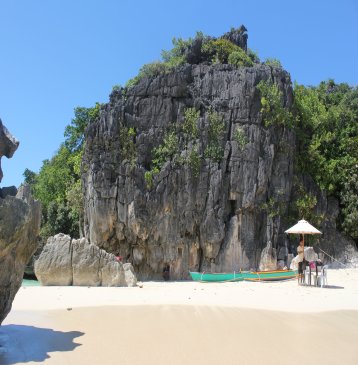 Matukad Island is one of the more popular places to visit for tourists, and it’s easy to see why. Nature at its best and only about a 20-minute boat ride from Gota Beach. 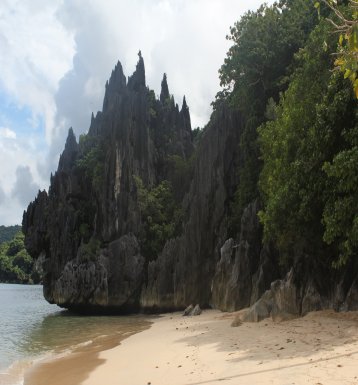 Hunongan Cove has a resort that is a little more exclusive than Gota Village resort, and the natural surroundings show why. Cotivas Island, just off Lahuy Island, is the island where the very first series of Survivor was shot. These relaxing little nipa huts are on a sandbar at the end of the island. They are a sensational place to chill out, looking towards the Pacific Ocean. The western side of Cotivas Island. This is a postcard-perfect deserted island of absolute tranquility. Cotivas Island is only about a one-hour boat ride from Gota Beach. 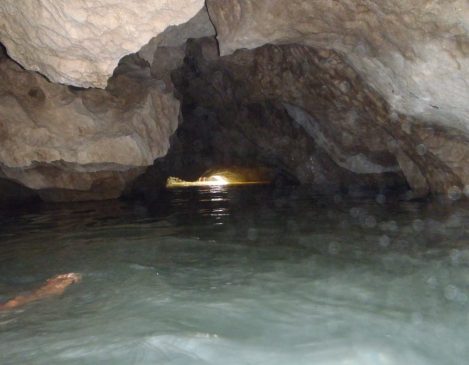 Bulanbogang Underground River is only about a fifteen-minute drive from Gota Village Resort. It’s a bit of a tight squeeze as you maneuver through it, but well worth a look.

Your main cost will be the boat hire for your island hopping adventures. You can expect to pay between P1,500 and 2,000 for the day, depending on which islands you go to. The resort that you stay at should be able to organize your island hopping.

The first step of this epic trip is to fly from Manila to Naga City.

Philippine Airlines (PAL) fly to Naga City from Manila twice daily and the flight is only about 40 minutes.

You can then take a van from Naga City Central Bus terminal to Sabang Port, which is just over 60kms and takes about one hour and fifteen minutes, for about P150.

From Sabang Port, you take a boat to Caramoan Guijalo Port, which takes about one hour and forty-five minutes, for about P120. From there, it’s about 10km (about 30 minutes) ride to Caramoan town central via van or jeepney, for about P100.

We used a tour organiser for our trip, including the hotel and all the connections by air, land and sea (excluding island hopping). Considering it is such a long journey, and with a couple of young kids in tow, it was a real comfort having someone waiting for us at each port with instructions of what to do next. It’s not essential, but I would recommend it for this type of trip.