Davao City, the centre of Metro Davao, is the largest city in the country in terms of land area. Davao City serves as the main trade, commerce, and industry hub of Mindanao, and is the regional center of the Davao Region (source: Wikipedia). As mentioned earlier, I have a special affinity with Davao as this was the very first place I visited in the Philippines back in 1997.

Davao City is famous for a few national treasures including Mount Apo, a dormant volcano which is also the highest mountain in the Philippines, and the endemic and endangered Philippine eagle, the country’s national bird, considered to be the largest eagle in the world. Davao is also famous for its fruit including the extremely smelly durian, mangosteen, jackfruit, pomelo and of course, bananas and is also the Orchid Flower capital of the Philippines.

Metro Davao offers a number of tourist destinations including organised treks to the summit of Mt. Apo, the Philippine Eagle Foundation and Nature Center, Eden Nature Park and Resort, Davao Crocodile Park, Magsaysay Park and People’s Park in the city center which is popular for its sculptures of indigenous people and dancing fountain.

As I have written about under the Davao Region, there is also nearby Samal Island featuring scenic beaches and the famous Pearl Farm Beach Resort, as well as the beautiful and unspoiled Talikud Island. Davao has many rivers, rapids, and waterfalls, which offer a variety of outdoor activities, such as white water rafting, river tubing, zip lining, wakeboarding, and jet skiing.

Unlike other parts of the Philippines, the Spanish influence and colonization didn’t really begin to make a mark in Davao until the mid-19th century. In the early 20th century, Davao’s rapid growth saw some large-scale investment and development by both the Americans and the Japanese however, World War II destroyed a lot of the good work that was done in making Davao the economic success story that it was at the time.

Davao has been under strict governmental control over the last couple of decades and as a result, is arguably considered the cleanest and safest city in the Philippines. However, caution must still be exercised on the outskirts of the Metro area.

There has been a lot written about Davao, some good, some not so good, but I have always enjoyed Davao and have not had any problems there, so I recommend it as a place to visit for sure, especially the scenic beaches of nearby Samal Island. Sky cycling with my daughters at Eden Nature Park and Resort, a mountain resort located about 30kms away from downtown Davao City. This is a very relaxing place with a number of other activities including zip lining, horse riding and an eco-adventure tour. A traditional Mandaya House as part of the cultural village at Davao Crocodile Park. This village is a small scale recreation of a typical Davaoeño village, showcasing clothing, housing, and other cultural relics and ways of life. Magsaysay Park is a very popular attraction for both locals and tourists. With clear views of Davao Gulf, this park has been wonderfully landscaped and is a nice place to relax and take in the ocean breeze. Mt. Apo, located 40 kilometers southwest from the city proper, is a dormant volcano. With an elevation of 2,954 metres (9,692 ft) above sea level, it’s the highest peak in the Philippines and one of the tallest in the Asian region. 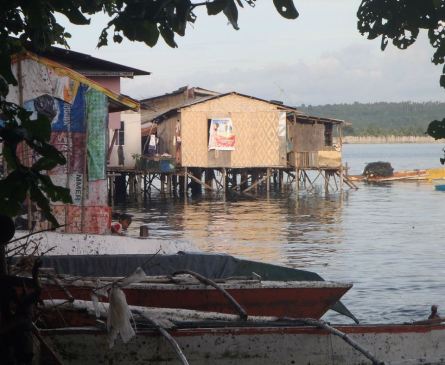 Some typical Pinoy fisherman shanties by the beach in the Agdao area with Samal Insland in the background. Like all contrasts in this country, once on Samal Island, its hard to believe these shanties even exist.

The airport is only about 10kms, or about 30 mins drive, from downtown Davao City, and there are plenty of taxis available from the airport. Fare is less than P200.

In other write-ups I have done about the Davao region, I have mentioned Samal and Talikud Islands which are must see places when in Davao. As I love the beach so much, my personal recommendation is get across to Samal and/or Talikud Island, even if only for a day trip.