Ayala Triangle Gardens Used To Be An Airport?

Ayala Triangle is a historically and significant part of Makati.  Prior to World War II, its name was Nielsen Field and it was in fact, Manila’s Airport. The location is right at the heart of the Makati business district. In 1948, the airport was decommissioned and transferred to its current site (NAIA 1, 2 & 3). The current roads on the perimeter of Ayala Triangle were former runways of the airport. These now serve as the boundary for Ayala Triangle Gardens: Makati Avenue, Paseo de Roxas, and Ayala Avenue. The airport’s control tower was the beneficiary of preservation, with a Heritage Library being developed from it. It has since become a fine dining restaurant and therefore, has become even more popular.

Serenity in the middle of a concrete jungle

For many years, Ayala Triangle was basically an unkempt urban jungle.  The only real landmarks were on the Ayala Avenue side, which notably houses the Philippine Stock Exchange, built in 1971. In 2009, a recreational park and commercial establishment were developed. This now houses a number of coffee shops and restaurants in Ayala Triangle.

Ayala Triangle has also become a very popular location for fitness fanatics. You can often see people using the triangle’s outer perimeter for jogging, whilst others use the park for walking, yoga and other physical activities. Ayala Triangle Gardens remains one of the very few green places left in Metro Manila Philippines. It is well worth a visit is only a five-minute stroll from the bars and restaurants of Greenbelt. It’s hard to believe this park in the middle of a concrete jungle, was formerly an airport.

Unfortunately, the park is giving way to modern development. Just beyond this row of palm trees, construction has begun for the new Mandarin Oriental Hotel (2015). Looking across to Paseo de Roxas towards Salcedo Village, an area I lived for several years. 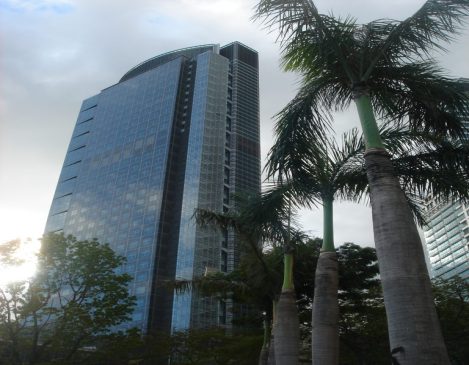 A view of Equitable Tower from Ayala Triangle, one of the many tall buildings on the outer perimeter of the area.

The Festival of Lights is a very popular attraction. It is usually held from mid-November, until the end of the first week of January. The light shows occur every 30 minutes from 6 p.m. to 10 p.m. accompanied by music. There are several nice restaurants in the Ayala Triangle Park but in the old control tower on Makati Ave is a fine dining restaurant called Blackbird which is well worth a visit. After dinner you can take a nice stroll around the park with an ice cream.