July is on our doorstep which signifies the start of “Habagat” season. Habagat is the south-west monsoon and brings torrential rain from the Palawan (south-west) region of the Philippines. It is also the time of year when typhoons roll in from the Pacific Ocean. When typhoons come together with the Habagat, it can be an absolute disaster and makes planning travel and holidays here very difficult.

I have mentioned in a previous blog about how the wet season works here in the Philippines. So getting on with this week’s blog, with the next couple of months looking pretty wet, rather than write about some places to visit, I thought I would change tack slightly. In this article, I have decided to share with you some of the most bizarre things I have seen in my travels in the Philippines, rather just talking about the best places in the Philippines or the most popular Philippines destinations.

One of the things I love about travelling around the Philippines is watching Filipinos go about their daily lives. As is often said, necessity is the mother of all invention. As a result of this, I have seen some of the most bizarre things that to me are completely hilarious yet also mind-boggling. Yet for the everyday Filipino, it’s just a means to an end. They are just trying to get from A to B or they are just going about their daily lives oblivious to the dangers or impracticalities of their actions.

Based on some of the things I have seen, this could end up being a very long blog. So rather than crap on with too much more detail, I will share with you some photos from my travels featuring some of the most bizarre things I have seen in the Philippines. Narrowing it down to 15 was quite a challenge as I literally have dozens of photos, but hopefully what I have chosen covers a fair variety of situations. Some of these photos you may find humorous, some will shock you and some will just leave you speechless. Either way, I hope you enjoy these photos and that it helps to give you a bit more of insight into the real Philippines. This is one of the more common sights in the Philippines, particularly around towns and cities. You certainly wouldn’t want to be an electrician in this country! This was taken in Makati. I’m sure there is a kitchen sink on there somewhere! Absolutely amazing how much can be fitted on this motorbike. This was taken in San Rosario in Batangas. This photo isn’t the best quality photo as I had to take it quickly in case I missed the shot. Yes, that is a dog on the back of a motorbike in morning peak hour traffic in Manila. The thing that amused me the most is that nobody seemed as amused as me with people just continuing on with their lives without drawing much attention to the situation. Maybe it happens more than I think? It might be a bit hard to tell from this angle, but we counted 15 people on this tricycle, including the driver. I’m not quite sure that 150cc motorbikes were designed for that workload. However, as I have said, how else can you get from point A to point B? I’m a bit of an animal libber and don’t like to see animals suffering. This photo was taken in Sipalay in Negros Occidental. I was at a local market when I came across this fairly disturbing situation, a purpose built rack on the motorbike. And yes, unfortunately, the goats were alive 🙁 Filipino family outings are made all the more fun on a motorbike, especially if you can make it without having an accident. This was taken in Davao but its a common sight across the country. Filipinos have what I consider to be a special talent when it comes to sleeping. I have even seen a Filipino fall asleep standing up! However, sleeping on a concrete barrier with your legs elevated above you against a brick wall is something else. That man has got talent! Ok, this might be a bit hard to work out, so here is the explanation – its an able-bodied guy, with some sort of clandestine device under his head, which could be described as a block with roller skate wheels underneath it, with flip-flops on his hands, facing the opposite direction to which he is traveling (you can see the mirror on the end of the contraption that he is looking in to), with no one guiding him, or cordoning off his path, at about 5pm on a Friday night in Makati. Why?? 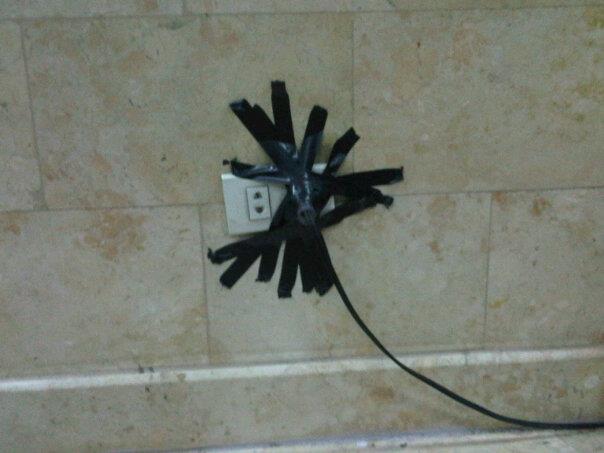 This photo was taken at Mactan Airport in Cebu. I think they are trying to make sure the plug doesn’t fall out from the socket? This photo is quite disturbing and confronting also. I used to see this guy on the way to work most mornings begging on the street, just around the corner from where I live in Manila. Apologies again for the quality of the photo but just to explain a bit further, this guy has no legs and one arm. Think you’re having a bad day? Another clever dog riding on the back of a motorbike. Unlike the earlier photo, this dog isn’t leaning on his owner and is totally balancing himself on the seat. This photo was taken in Bago City in Negros Occidental. As this photo was taken at night, you need to look a little more closely. There is a guy riding on the fender of this passenger jeep in Davao City. I just hope the driver doesn’t need to stop quickly or swerve! This is another classic example of Filipino improvisation. If you need to move a clear plastic box from point A to point B, and you only have a motorbike, what do you do? Put the plastic box over your head of course! This was taken in Rizal province just outside Manila. Is that the frame of the building or the scaffolding? In the Philippines, the scaffolding is usually lumber as it is a cheaper option but it can look like a barrel full of wooden skewers. This photo was taken in Paranaque Manila. More classic Filipino improvisation with an actual wheel “chair”. Fairly ingenious when you think about it but I couldn’t stop laughing when I saw this in peak hour metro Manila traffic. Why reinvent the wheel?

So there you have it. I hope you found these photos as amusing as I did. As you can see, there is no shortage of bizarre things in this country. To be honest, that really is one of the things I love about this place. Nothing really seems to bother Filipinos too much and by and large, they just get on with the lives. Western society can learn a lot from these people.

You need to check out this first video below. This is not necessarily bizarre, but its a brilliant bit of improvisation that you will only see in the Philippines. Please watch the video below for a good laugh.

Ingenious Filipino Improvisation! Check This Out! | Deztreks
You Won't Believe This! Venice Grand Canal in Manila | Deztreks
15 Reasons Why The Philippines Is The Best Country In Asia | Deztreks

Please leave comments below and don’t forget to share this article with your family and friends. Please also check out my related articles below.

Best 8 Beaches to Visit in the Philippines in 2019