Located in the town of Pilár, in the province of Bataan, Mt. Samat National Shrine is a memorial complex that was built in remembrance and honour of the soldiers who perished during the Battle of Bataan during World War II.

This is one of the most unique places to visit in northern Luzon. The building of the complex was commissioned by President Ferdinand Marcos back in 1966. It was completed in time to celebrate the 25th anniversary of the Second World War.

The attraction is made up of the Memorial Cross and a shrine complex which also houses a museum that includes a variety of exhibits including war equipment used during the Battle of Bataan, which pitted Japanese forces on one side against Filipino and American forces on the other.

As one of the main structures in this location, the Shrine of Valour is designed to capture the eyes and hearts of visitors.

The structure is held up by white columns and adorned with beautiful coloured glass details. It really is an epic structure.

The walls of the structure bear written accounts of the events marking the Battle of Bataan. Relief sculptures that tell the story of everything that happened to the soldiers can be seen at the bottom of the shrine.

Additional exhibits that tell more of the story can be found in the museum located the shrine’s basement. Some of the exhibits include photographs, uniforms and military equipment.

The most noticeable feature, visible from miles away, is the Memorial Cross. To get to the cross, you use a concrete pathway (or you can drive to the car park that’s located right next to it).

Even though you can enjoy great views of the surrounding area from the bottom of the cross, the viewing deck located on the elevated arms provides exceptional views of Bataan and Manila Bay. You can actually take an elevator to get there!

There’s no doubt that the Mt. Samat National Shrine is one of the most significant attractions in the Filipino province of Bataan. It really is an awesome experience that you really need to put on your list of places to visit. 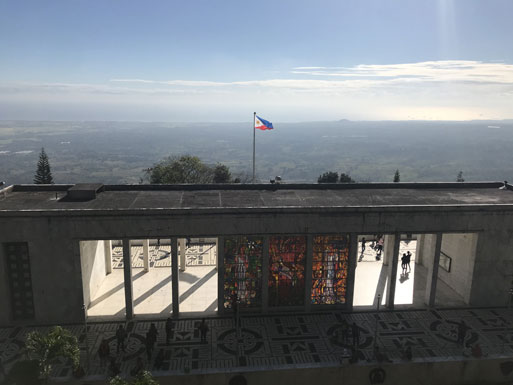 I recommend leaving Manila before daybreak to visit Mt. Samat National Shrine. You will most likely only spend an hour there (unless you want to join the long queue for the elevator up the cross). From there, you can head to Dunsulan Falls which is only about a 15-minute drive. Here there is a picnic area so pack yourself a picnic lunch and chill out for a couple of hours before heading back to Manila.