In the municipality of Dasol, in the province of Pangasinan, you will find a sleepy little place called Tambabong. This little-hidden gem is way off the beaten track for most local and foreign travellers alike. It is nowhere near as well known as the more popular One Hundred Islands. I was lucky enough to stumble across a few photos of this on the net one day. It captivated me immediately. I knew that I just had to visit this place due to its isolation and mystery!

Now, I have to say this is not the easiest place to get to. However, I suggest you tie it in with a road trip and look to cover the Pangasinan area. Even if you took a trip further south to the Zambales area, then it is well worth the effort.

Like many of the places I have visited in the Philippines, Tambabong has total raw beauty. In a way, that’s what makes it so attractive as it isn’t crawling with tourists. However, you can’t help but wonder what could be done if there was more investment made to develop this area.

We stayed at a resort called Vivian’s Place. This was a fairly mid-range place, however, Vivian’s husband is a Swiss guy. As a result, she is empathetic to European standards, so the food and hospitality were good. This resort is literally less than 30 metres across the road from the golden sand beach, and crystal clear water.

Nearby off the coast, there is also the uninhabited islands of Snake Island (Colibra Island) and Crocodile Island. Snake Island, in particular, is a beautiful secluded island with golden sand and turquoise coloured water. Both of these can be done on the same day. You can organize a boat with Vivian or with the local fisherman. The cost is less than P1,000 for the day. Tambobong White Beach is the main beach in Tambobong and like many of the places I have been to, there were no foreign tourists. Considering when I went to Tambobong is was Easter, the beach was still relatively unpopulated and there was plenty of room to relax. Snake Island, also known as Colibra Island, is a small uninhabited island off the coast from Tambobong. It isn’t really geared up for tourism and as such, there are no facilities there, only the pure natural beauty of the place. Crocodile Island is also off the coast of Tambobong and is a rugged island with a small cave and some amazing rock formations. With a hill in the middle of the island, it offers some great views. 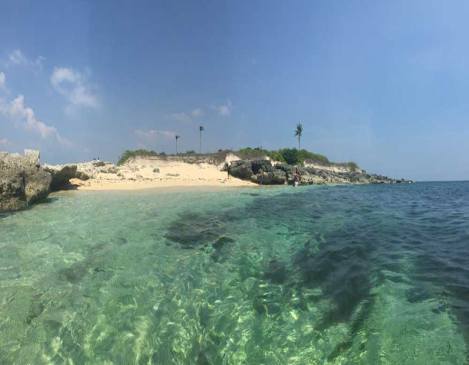 A panoramic shot of Colibra Island captures the golden sand and the crystal clear water, in all its natural beauty.

From Makati to Dasol it’s about 290kms, which can take well over five hours, depending on the traffic. You can get there via the NLEX and SCTEX, through Alaminos (One Hundred Islands), and then through the town of Burgos.

From Pasay City, you can get a bus straight to Alaminos (with a couple of stopovers on the way). That can take up to seven hours depending on traffic, and the cost for a round trip is just under P1,000. Once you arrive in Alaminos (One Hundred Islands), you can take a bus bound for Sta. Cruz in Zambales which will take about one hour and cost less than P200.

My recommendation would be to do what I did and take in a tour of the north western Pangasinan coast, taking in One Hundred Islands, then Bolinao, then down past Agno to see Umbrella Rocks, and finally Tambobong Beach in Dasol. From there you can drive down the coast through Zambales and then even take in Subic on the way back to Manila, depending on your time frame. Of course, you would need to hire a car or van to do this, and allow several days, but it would be well worth the effort and cost.