The main emphasis of this website is to share with the world the absolutely amazing places to visit in the Philippines. Therefore, when thinking of content to write about the Manila American Cemetery and Memorial, I gave it some very serious thought. I wasn’t even sure if I should include it on my website at all as a place to visit. The fact you’re reading this page now is a testament to my decision.

I don’t want to sound like a hippie and get into political rhetoric, but I absolutely detest war and violence. However, it is a part of our history and I believe that understanding it helps. It helps us in the healing process but can also help to hopefully prevent it happening in the future.

The Silence Is Deafening

For years and years I avoided going to the Manila American Cemetery and Memorial as to me, it represented the things I detest – needless deaths and violence. One day a friend of mine caught me at a weak moment and really encouraged me to go. So I did. And I’m so glad I did as that experience really opened my eyes up to so many things. I now make sure that I take any new visitors to the country for a visit to this amazing place. And everyone I take there enjoys it immensely and is truly moved by the experience.

As an Aussie, I don’t think most of us realise how much of a part the Philippines played in World War II. Beautiful mosaics are on display mapping out the entire story of World War II, East and West. There are literally tens of thousands of names of those that needlessly lost their lives. You will also find a small chapel and bell tower there for those who care to say a prayer. The entire monument is an amazing spectacle. It is also one of the very few places in Metro Manila where it is totally silent! No car horns, no noisy high pitched motorbike engines – nothing but silence. That in itself makes the visit more than worthwhile!

The Manila American Cemetery and Memorial is located in Fort Bonifacio. Situated on top of a plateau, the views of the surrounding metro area are amazing from a tourist perspective. The cemetery is 152 acres or 615,000 square metres in area and holds a total of 17,206 graves. This is the largest number of graves of any cemetery for U.S. personnel killed during World War II. It also holds the war dead from the Philippines and other US allies.

Many of the personnel whose remains are interred, or represented, were killed in New Guinea or during the Battle of the Philippines (1941–42), or during the Allied recapture of the islands. The headstones are made of marble which is aligned in eleven plots forming a generally circular pattern. This is then set among a wide variety of tropical trees and shrubbery. The American Battle Monuments Commission maintains the Memorial. Despite the sombre vibe of the place, it is well worth a visit and gives you time to reflect and realise how senseless war is…. It’s absolutely mind-boggling to think there are over 17,000 graves for young men (and women) who died for their country. Most in the prime of their lives. The memorial, or main building, has the names of all those killed or MIA in the region during WWII, inscribed on its walls. Hundreds of headstones sadly line the luscious grass with the memorial building in the background. 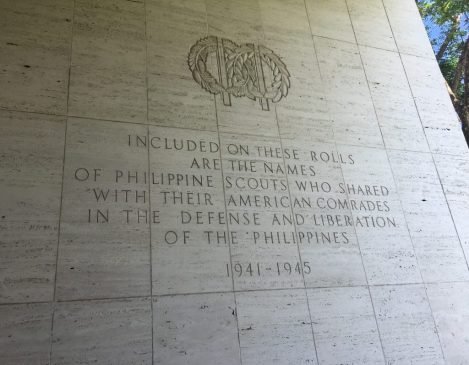 A tribute to the Philippine soldiers for their efforts in supporting the US against the Japanese onslaught.

The American War Cemetery can be reached most easily from Makati city via McKinley Road, then to McKinley Parkway inside the Bonifacio Global City. The Nichols Field Road (Lawton Ave) is the easiest access from Manila International Airport to the cemetery. Taxi or Uber are easy enough modes of transport to take you there.

The cemetery is open daily to the public from 9:00 a.m. to 5:00 p.m. except December 25 and January 1. The view of the surrounding metro area really does make this a place to visit.