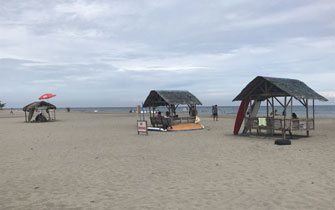 La Union The Surfing Capital Of The North

La Union is a province in the Philippines situated on the island of Luzon about 6 hours north of Manila and the capital is the city of San Fernando.

With its beautiful botanical gardens and fine coastline that faces the South China Sea, it is nicknamed the “Garden Coast”. It is also dubbed as the “Surfing Capital of Northern Philippines” for its excellent world-class surfing breaks.

A Short History of La Union

La Union was created by a Royal Decree issued by Queen Isabella of Spain in 1572 and consisted of the union of 9 towns of Pangasinan, 3 of Ilocos Sur, and the villages of Eastern Pais del Igorotes, which is where the name came from.

Well before the arrival of the Spaniards, it was already an important and bustling trading port, especially for gold, with the presence of Japanese and Chinese merchants in the area.

Since 1991, the well renowned Wallace Air Station has since been converted into an industrial and business area to facilitate the increased economic activity in the area with shipping, manufacturing, service, and agriculture spread throughout La Union.

In the past ten years, La Union tourism fell way behind other destinations like Palawan, Boracay, Batangas, and One Hundred Islands in Pangasinan.

Since then the province has experienced a major comeback with local and international surfing communities favouring it as one of the most popular surfing sites in the Philippines after Mindanao and Siargao.

Two major surfing competitions are held every December in La Union which draws top surfing talents – the Treasure of the North (Rimat Ti Amianan), and the Mabuhay Longboarding Cup.

Besides surfing, the Botanical Gardens in the capital of San Fernando City is a ten-hectare garden facility that showcases different pavilions such as the Fragrance Garden, the Palmery, the Fernery, the Sunken Garden, Arid Paradise, the Shade Garden, and the Evergreen Garden.

These beautiful gardens offer a welcome respite from the searing hot and humid weather of the province and boast indigenous fauna and flora that are unique to the Philippines only.

Another popular attraction is the Taoist Temple, Ma-Cho, situated on a hill seventy feet above the sea with stunning views of the bay.

The temple was constructed by the Chinese community in reverence of the Chinese deity, Ma-Cho who was born during the Sung Dynasty in 960 AD.

According to legend, she was an active participant in the rescue of distressed fishermen, earning her the titles of “Queen of Heaven” or Goddess of the Sea”.

Each year pilgrims and devotees of Ma-Cho gather at an annual celebration of enshrinement for a pilgrimage to Batangas and back, ending in a procession around the city centre of San Fernando.

Another place you can visit is Baguio which us less than 80kms away from San Juan, or about two hours drive.

Depending on how much time you have, you could stay one night in La Union and then one night in Baguio. This way you can get to experience the mountains and the sea.

One of the more established resorts in San Juan is the San Juan Surf Resort which is usually fully booked during weekends, so book early.

The Surfer’s Inn with its bohemian appeal is somewhat cheaper and Lola Nanny’s, middle of the road place to stay has only basic accommodation. At most resorts, there are surfboards for hire.

For those who can afford to splurge, the Thunderbird Resort in Poro Point is more upmarket with a nine-hole golf course, a casino, and Mediterranean-inspired villas in the area overlooking the South China Sea. Wide-open beach in San Juan with hardly any tourists If you want to learn surfing, San Juan is the place Please check out my vlog below:

La Union is located about 250kms north of Manila and takes just over 5 hours to reach by car. You can head straight up the NLEX and TPLEX for a relatively easy drive.

There are several bus lines that go from Manila to La Union departing from Pasay or Cubao. The fare is around P400 one way for an aircon bus.

San Juan is where all the surfing happens and is a great little tourist town with plenty of action. Even if you’re not into surfing like me, it is still well worth a visit because of the vibe and the atmosphere. If you are looking for a weekend getaway, I suggest heading up there Friday morning, staying there Friday and Saturday night, and head back after lunch on Sunday.