Intramuros Tour – Where The Walls Still Stand In Silence

What better way to see Old Manila than with an Intramuros tour.  Intramuros Manila tours have become very popular as visitors learn the historical connection between the Philippines and Spain. Taken from the Latin word meaning “within the walls”, Intramuros is the oldest district and historic core of the City of Manila, the capital of the Philippines. The city of Intramuros served as the political, cultural, educational, religious and commercial centre of Spain’s empire in the East for centuries.

In the late 16th century, the Spanish colonial government had a plan. As a result, the defensive walls were constructed. This was primarily to protect the city from foreign invasions. Guarding the old city is Fort Santiago, located at the mouth of the Pasig River. In 1898, the Spanish-American War brought the Americans to the Philippines, and the city was surrendered as a result.

Intramuros was heavily damaged during the battle to recapture the city from the Japanese Imperial Army during the Second World War. Many of the walls and other structures were destroyed. The damage from the Second World War left the place a dead city. This was despite surviving typhoons, earthquakes, fires and wars for centuries.

My first walking tour of this historical, ancient city left me totally amazed. As an Australian, I had no idea how much of a role the Philippines actually played in containing the attempted invasion of Australia by the Japanese. I also didn’t realise the extent of the Spanish colonization of not just Manila, but the whole Philippines. I have now got a deeper appreciation and understanding of how the Philippines came to be the country it is today, through my visit to Intramuros. A tour of Manila wouldn’t be complete without visiting Intramuros.

An Intramuros tour will only take about half a day on foot. Therefore,  you can incorporate this into a whole day tour taking in other attractions in the old section of Manila. This Manila tour can include a visit to the worlds oldest Chinatown in Binondo, Manila Ocean Park and/or Rizal Park, and then you could head to Bay City for the evening.

There are a number of walking tours available if you are interested in an Intramuros tour.  Personally, I would fully recommend an Intramuros tour by foot. This is not only the best way to see Intramuros in Manila, but to learn about it. The tour guide will explain everything you need to know which gives you a much better appreciation for the place. I don’t have an affiliation with any tour guides, but if you google it, I’m sure you can find a tour operator who can assist. The first Manila Cathedral was constructed in 1851 and was built using only nipa and bamboo. The cathedral has been constructed 6 times during its history. The reason for this is because of natural disasters like earthquakes, typhoons, fires and the bombings from World War II. The current cathedral was built in 1958. 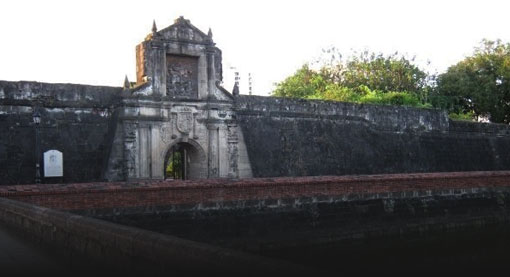 Fort Santiago is a defence fortress. Spanish conquistador, Miguel López de Legazpi, had this built for him. Fort Santiago was once the site of the palace and kingdom of Rajah Suleiman, a Muslim chieftain of pre-Hispanic Manila. The entrance gate to Fort Santiago. There have been some repairs to this entrance. There is a famous photo of an American Army tank driving through this entrance damaging the arc. The extent of the damage is more evident from inside the fort. At the front of Fort Santiago, you will find Plaza Moriones. This is a lovely park to relax in. There is a walkway on each side. One of these paths shows the path which national hero, Jose Rizal, walked on the morning of his execution in 1898. Some nice colonial architecture on Gen. Luna Street. This type of architecture is a common sight in Intramuros. The narrow, cobblestone roads, take you back in time. Casa Manila is a colonial lifestyle museum in Intramuros and is very popular with local and overseas tourists.

Depending on where you’re staying in Manila, this will determine how you will get to Intramuros. The easiest way in most cases would be to take Uber or a taxi, which is affordable and easy to get. A fare from Makati to Intramuros should cost no more than P300.

For the record, Intramuros is about 10kms from Makati, which could take anywhere from 30mins to 1.5 hours in Manila traffic.

A nice leisurely way to see some of the historical landmarks around Intramuros, and take a trip back in time, is with a Kalesa (horse-drawn carriage).

They are a common feature around Intramuros and are easy enough to find. The cost is about P350 for thirty minutes, and they can take 2-3 passengers each.

You can also tie in a trip to Manila Chinatown in nearby Binondo for lunch and enjoy the many Chinese culinary delights on offer from the dozens of restaurants in the area.