Dinadiawan Is Giving Baler Some Competition

Dinadiawan, in Dipaculao, Aurora province, lies on the eastern coast of Luzon on the shores of the Pacific Ocean. It’s approximately 320kms from Manila. While not as renowned as the more popular surfing beach of Baler, DipaculaoBeach is a much better beach. There is golden sand and turquoise blue water to rival Baler Bay. This is all set in the foothills of the Sierra Madre mountain range, which offers breathtaking scenery.

Unfortunately, a typhoon swept through the southern Philippines while we were there. As a result, monsoonal rains had formed all over Aurora province. However, this didn’t deter us and as a matter of fact, the air and water temperature were just about perfect. We were able to go paddle boarding and swimming without being worried about being burnt to a crisp by the sun. There was also some decent 1-2 metres waves which were some of the biggest I have seen in what are normally very serene waters. The beach here drops off very quickly. As a result, the waves were breaking very close to the shore.

Great roads for a road trip

We did a road trip up there with a group of about ten of us. The condition of the roads all the way up there left us all pleasantly surprised. There was hardly a single pothole and there was very little traffic in either direction. Luckily, we didn’t really pass through the usual provincial towns that are clogged with jeepneys, tricycles and buses.

As we passed through Baler and continued north along the coast heading for Dinadiawan, we were treated to some of the most incredible ocean views. The road snakes its way up the Sierra Madre mountain range and back down again. And the water was an amazing light blue colour, with plenty of strong waves breaking along the shore.

Where the river meets the sea

We were also treated to the amazing sight of a small river that made its way down the mountain range and straight out into the ocean. The amazing little canyons carved into the beach’s sand as the water made its way into the ocean. There was one point where the fresh mountain water met the warm ocean water.  With the waves breaking at the mouth of the river, it was an amazing sight to behold. You can also check out my video which will give you a real good look and feel for the place. This is a place we will definitely be back to visit despite the long drive to get there.

The millennium tree of Baler

One of the other spectacles was on the way back in which we stopped at Balete Park in Barangay Quirino, Maria Aurora. We were eager to see the famous Balete tree, known as the “Millennium Tree”. This particular tree is the largest of its kind in Asia and is estimated to be about 600+ years old. It really is massive at about 60 metres tall and with its root system about 10 metres to 15 metres in diameter. It is possible for an adult to squeeze into the centre of its tangling root network. Truly awe inspiring. 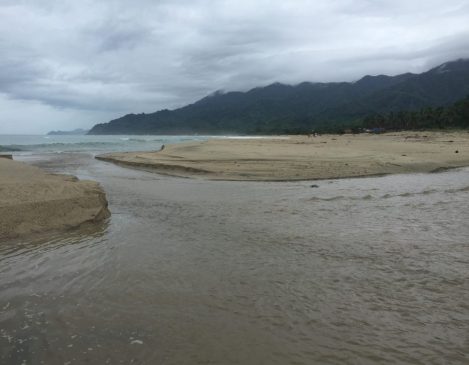 The river meeting the ocean was a spectacular sight, especially as the tide rose and sank. 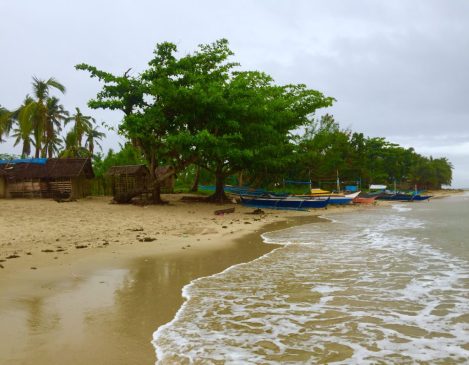 Typical local fishing village on the beach. Not a bad place to work I guess… 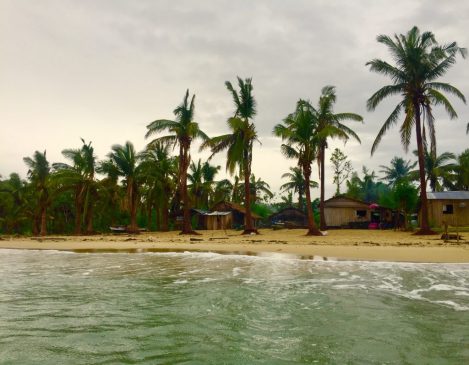 Looking back from the ocean to the Sierra Madre mountain range. It really was a pity about the weather when we were here, but you can still see how beautiful the sand and water are. The 600+-year-old “Millennium Tree” in Maria Aurora. The trunk is so wide people can actually walk among the roots that surround the trunk.

Please click below to watch my short video on Dinadiawan.

Dinadiawan is approximately 320kms from Makati via the NLEX and SCTEX through Tarlac and Cabanatuan through to Maria Aurora. It took us approximately six and a half hours to get there but don’t be put off by the long drive because as mentioned earlier, the roads and traffic going up there are very good and scenery is absolutely epic. And as they say, it’s the journey not the destination that matters the most!

Genesis Transportation provides the only direct bus from Manila (along EDSA in Cubao, Quezon City) to Baler and now directly to Dipaculao. Alternately, you can catch a bus from Manila to Cabanatuan (there are many choices such as Five Star, Baliwag, ES Transport, and jump in a van to Baler at the Central Bus Station there (leaves when it’s full). Aside from the vans, there are also Genesis and Aurora Bus Company buses that leave for Baler from the Cabanatuan Central Bus Station. Check their website for schedule and rates.

Being such a long drive, it is suggested to make it worthwhile; you stay there for at least 3-4 nights. There is also the opportunity to visit the Millineum tree in Maria Aurora, as well as Ditumabo Mother Falls in nearby San Luis and also Bulos Falls in Dipaculao.