Dampalitan Island – The Island That Isn’t An Island

Dampalitan Island isn’t really an island – it is more like a small peninsula in Quezon province. This was our last stop of the day after Puting Buhangin and Borawan and by the time we reached Dampalitan, it was already late in the afternoon. As we were approaching, even from kilometres away, you could really notice the white sand glowing on the horizon, an amazing sight.

The other thing I noticed as we pulled in was the pine trees mixed in with the palm trees along the beach, which is not really the norm in this part of the Philippines. These pine trees made for some great photos as they formed an interesting silhouette against the sunset.

There were a few little stores around and some locals, but other than that, it was quite secluded. We took a walk around the southern side of the “island” and found some interesting rock formations which were exposed at low tide. Further around, there were several hundred metres of totally uninhabited white sand beach. As I stood in awe, beer in hand, I remember thinking to myself that it never ceases to amaze me that for a country of over one hundred million people, a beach that is relatively close to Metro Manila, can be so vacant.

Like Borawan, there are a few jellyfish around this area however, they do have nets in place to protect swimmers so it’s quite safe. The glowing white sand could be seen from kilometres away and was a real feature of this tropical paradise. Another one of the reasons I love exploring some of the out-of-the-way places – we get the whole of this beautiful beach to ourselves!

Total seclusion. There aren’t too many white sand beaches around that are this empty. Me looking for the money shot among a jungle of palm trees with the sun getting ready to set. 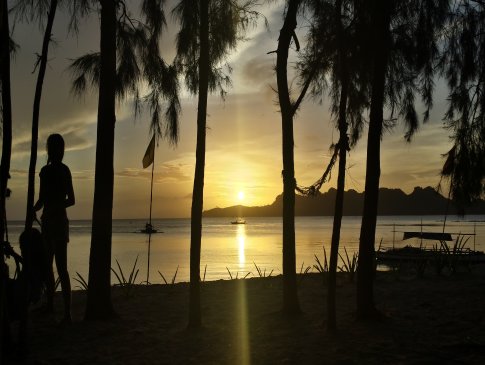 The sun setting through the pine trees gives a different feel than the usual palm trees. 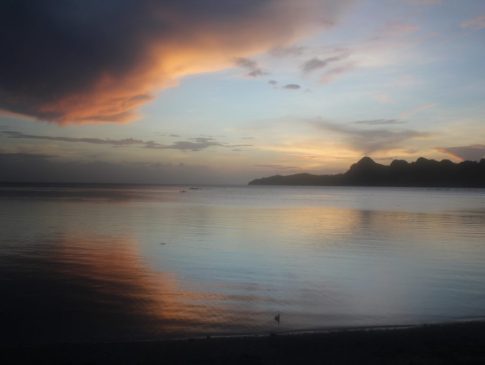 Looking back over towards Borawan Island with a sensational sunset unfolding. It was like someone had painted brush strokes across the sky.

From Manila, take the SLEX and STAR tollway, and via Lipa City, head to Lucena City on the Pan Philippine Highway. From Lucena, head to Paglibao and continue through to Padre Burgos on the way to Agdangan. The Tamarind Tree Resort, in Padre Burgos, is right down beside Paglibao Bay, about 180km from Manila. This drive takes about 3.5 to 4 hours.

From Buendia in Makati, take a bus to Lucena City, and get off at the Lucena Grand Terminal, which will take about 3 hours. The Tamarind Tree Resort (in Padre Burgos), is about 35kms from there. At Lucena terminal take, another bus going to Unisan or a jeepney bound for Agdangan, but be sure to get off at Barangay Basiao in Padre Burgos (look for QCRB Bank). From there, you will need a tricycle to The Tamarind Tree Resort. Cot for Bus/Jeepney/Tricycle: Allow P500-600.

My suggestion would be to head down from Manila aiming to arrive around midday at The Tamarind Tree Resort, chill out there for the afternoon, then head out first thing the next morning on the boat, and then head back to Manila that night.